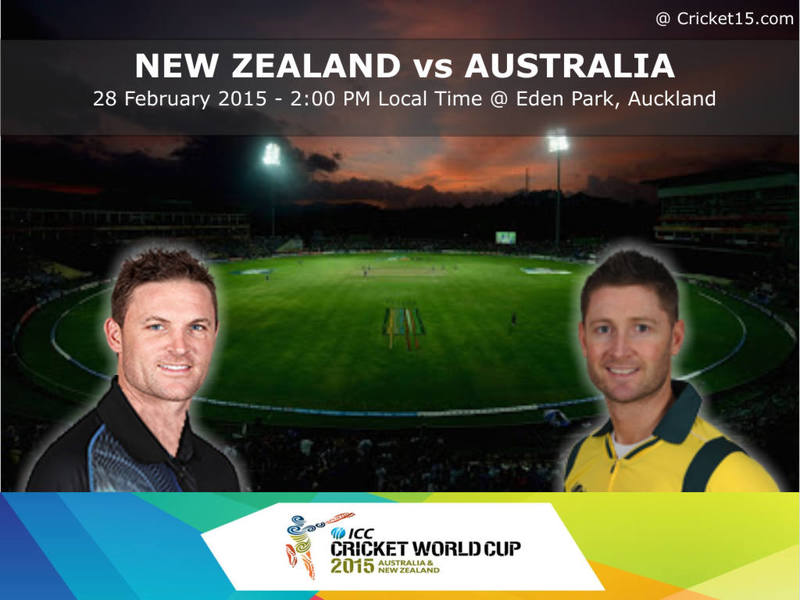 When you sit down thinking of this clash between the biggies, you often wonder if this looks awkward, considering the fact that both hosts play each other in a group stage fixture, and this would certainly deprive Australia of their home advantage. Nevertheless, this mouthwatering clash between these 2 long term rivals would certainly decide who would top group A.
Head-to-head
The Kangaroos have got a far better record than the Blackcaps, leading 84-34. In World Cups, the former leads 5-2. The last ICC fixture between these 2 sides was abandoned due to rain at Edgbaston, Birmingham.
Pitch and Weather Conditions
This is such a tiny ground, where straight boundaries are just around 60m. The pitch, generally a flat one, initially assists the new ball bowlers, with a good amount of swing and carry due to the wind. But the old ball bowlers would keep swearing should they get their lengths wrong at the death due to the nature of this ground. The weather at Auckland is forecasted to be sunny throughout, even though there would be some cloud intervention early on.
Briefing on both teams
Both New Zealand and Australia have got their World Cup campaign underway with bashing victories. Australia, after smashing England would have been aggrieved slightly after their washout against Bangladesh. Whereas for New Zealand, barring the Scotland fixture, it has been a walk in the park
Players to Watch out for
Kane Williamson
This young lad is in the form of his life. No ardent cricket lover would have him out of his/her fantasy league team. His record in 2014 is staggering. He is one of the rare players to have scored 6 successive 50+ scores. And on any given day, he can take you apart
Trent Boult
With a gifted ability to swing the ball both ways, he made his entry into ODI’s after he fared well in recent test series. Even though he played just second fiddle to Tim Southee against England, he was instrumental in that win along with those of Scotland and Sri Lanka.
Aaron Finch
He is a powerhouse at the top of the order along with David Warner. He got this World Cup under way with a smashing ton against England. He doesn’t bother about the situation of any given game, he just goes bang bang bang from ball number one. He is another player to watch out for
Mitchell Starc
Another big swinger of the cricket ball, he can reap havoc along with his partner Mitchell Johnson. He has has a good tri-series in the run up to this World Cup and it wont be a surprise to see him continue his form into this game
Win percentages
Recent stats suggest batting second has done more favours, and who can forget that high-scoring tied match between India and New Zealand? Well, that certainly was a special day with both teams tied up at 318 each
Teams
Southee has a bit of an injury scare, but will most likely make it to the playing 11 before Saturday. Otherwise, one would stick with this same teams.
Prediction
New Zealand win by defending a total of 280+.