At 5 am on the 4th of March, before the city of Chennai woke up, approximately 1700 people, donning red t-shirts and sports shoes, were all set for a marathon at the College of Engineering, Guindy. HaloWings'18, an eight-kilometre run originating at the University Grounds and passing through Kotturpuram, Saidapet, and back, was a commemoration of the Rare Disease Day (Feb 28). It was organised by the National Cadet Corps (NCC) Navy, Anna University, along with Lysosomal Storage Disorders Support Society (LSDSS) to spread awareness and build support for those with Lysosomal Storage Disorders. Tickets were priced at Rs.150 for students and Rs.300 for the others. Proceeds from the event went towards the treatment of patients at Lysosomal Storage Disorders Society. NCC cadets, students of Anna University, persons with LSD and their families, and doctors in the city participated in the run. 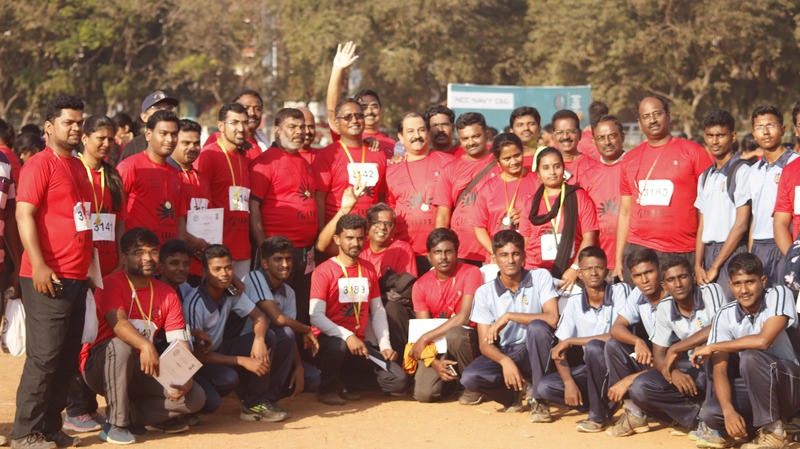 Lysosomal Storage Diseases are a group of about 50 rare, inherited metabolic disorders that result from defects in the lysosomal function. Lysosomes are sacs of enzymes within cells that digest large molecules and pass the fragments on to other parts of the cell for recycling. This process requires several critical enzymes. If one of these enzymes is defective because of a mutation, the large molecules accumulate within the cell, eventually killing it.

Dr.A.T.Arasar Seeralar, the Director of the Institute of Child Health and Hospital for Children, and Dr.K.Pramila, Professor of Biochemistry, Institute of Child Health and Hospital for Children, participated in the event and brought to light the broader issues of treatment and supportive care. Dr. Sreeralar said “The condition of the persons with these disorders are severe and chronic. While treatment is available for some disorders like MPS (type I, II, III, IV, VI), gaucher, pompe, and fabry, there are many others that we don’t know of. The few treatable diseases are very expensive, and not all persons with LSD find sponsors in the state. The enzyme therapy that patients require can cost from one to five lakh rupees per session, and so far only CSRs (Corporate Social Responsibilities) have been supportive with funds.” Dr. K.Pramila added “It was clinically diagnosed until last year, and only now companies like Genzyme and government hospitals are intervening. But it’s still at a nascent stage in terms of policy and budget allocation. So, there’s an urgent need to build awareness”.

Raja R, a member of the event’s organising team said “When so many people participate, we know that they are sensitive about the issue, and it’s great to see them run in the morning. The best part about this year? A 11-year-old girl, Kokila, came first and set a time of just 40 minutes”. All in all, the event was a grand success, and a significant amount of money was raised for a noble cause.