After The Fault In Our Stars comes the next most awaited movie release of this year - Gone Girl. To those of you who are unaware, Gone Girl is an adaptation of Gillian Finn’s book of the same name. It follows the story of Nick Dunne, who finds his wife Amy, missing from their home under ‘suspicious circumstances’. As revelations are made we get caught in a tangled mess of questions, the primary one being – did Nick kill his beautiful wife Amy? 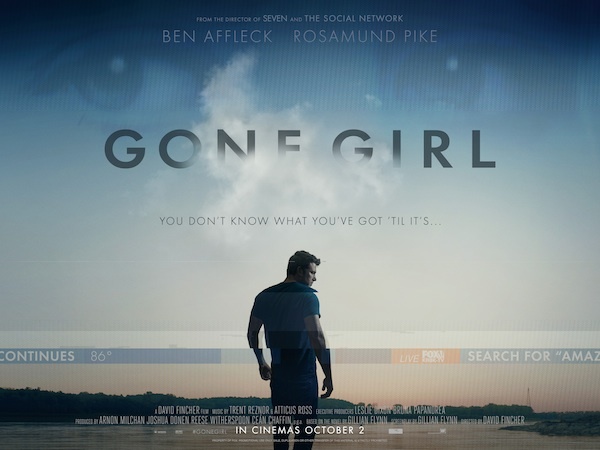 The movie explores the themes of gender roles, the media and its extremely scary ability to convince people of anything, the pressure for perfection and marriage, to name a few.

David Fincher has previously directed movies such as The Social Network and The Fight Club. Gone, Girl is exactly what you’d expect from him- picturesque cinematography and precise execution. The casting is perfect. Every single role, even the extremely minor ones, are well cast. Rosamund Pike as Amy and Tyler Perry as Tanner Bolt stand out of the crowd. For all you Neil Patrick Harris fans- he nails his role.

To A Fan of the Book- You’ll be a bit disappointed. It felt like we got too much of a look into Nick’s head but not enough into Amy’s. Rosamund Pike gave an excellent portrayal of Amy- too bad she didn’t get more of a narrative as in the book and we don’t get to see Amy with her multiple layers.

To the one who hasn’t read the book- Four words: Go watch the movie! I suggest you leave the book for later.

On a lighter note, if you’re extremely annoyed that Ben Affleck is going to be the next batman, you’ll love the fact that in one scene, Amy kindly points out to Nick that his chin makes him look villainous. Feel free to imagine that’s she is actually talking to Ben Affleck himself and snicker; after all it’s the chin that may ruin the illusion of Batman.

Oh, and make sure you watch the censored version to minimise the vulgarity.

Bottomline: The movie is really well dunne (see what I did there?).