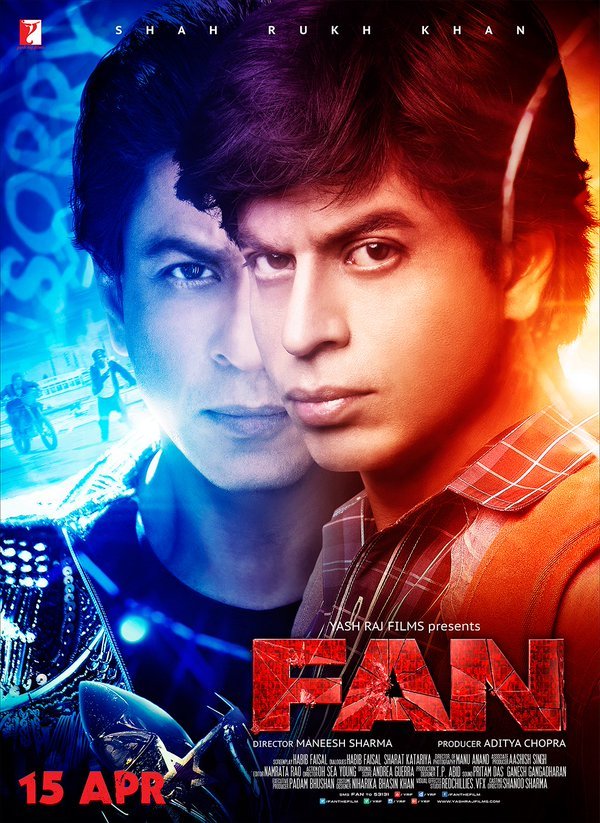 Let me honestly tell you that I am being shamelessly hedonistic as I weave words of flattery to describe a recent film of my favourite actor. Shah Rukh Khan. Naam toh suna hi hoga!

I can almost hear a few of my readers shirk with apparent disgust that I am a big fan of an ‘aging’ actor who plays youthful roles at 50 - one who lives an extravagant life, owns a cricket team and a production house (among other things) and occasionally makes silly entertainers that mock South Indians.

In my eyes however, SRK is a completely different person. I see him as the incredibly talented actor who has grown over the years, revolutionized Bollywood and made young girls like me believe that there’s definitely a Rahul or a Raj waiting for us somewhere.

As I entered the movie theatre to watch ‘FAN’ in its opening week, I couldn’t have been more excited. Of course, I had read all the rave reviews already and was completely prepared to get my mind blown away.

The film opens with a day in the life of young Gaurav Chandna, a doppelganger of the famous actor Aryan Khanna. Gaurav adores the latter and worships him as an Idol right from childhood. In an attempt to meet his ‘God’ in person, Gaurav makes the arduous journey to Mumbai only to be one among the swarming millions who get a fleeting darshan of their star on his birthday. Devastated, he finds a way to get the actor’s attention. Their meeting turns out to be completely contrary to the expected, and subsequently determines both their fates.

Why it’s worth more than your 120 Rupees

The beauty of the movie is how SRK’s phenomenal acting and Maneesh Sharma’s direction make you believe that the look-alikes are in fact, two very different people. The whole concept of SRK doing a double-role is something that slowly fades away as the movie progresses. As the tables turn in the second half, you find yourself perplexed and divided between the two characters. So who is the good guy and who is the bad guy?

As Gaurav, SRK carves out the true Dilli-waala and is very convincing as the obsessed fan, pulling off the buck teeth and swollen cheeks with elan. Extra credit for the make-up and costumes team!

The action scenes have been choreographed well, and the simple but effective background score accentuates the feel of the story. The locations in Dubrovnik and the streets of Delhi are interesting too!

With recurring cues to show us the parallels between his real life and the movie version (media-hyped rivalry with another actor/ being paid ‘a bomb’ to dance at lavish weddings, etc.), it almost feels as though Shah Rukh Khan is cleverly mocking himself. Now imagine him playing a look-alike fan who worships his star version. There are a few spectacular scenes in the movie when the fan imitates his star. No other actor in our film industry would have been able to successfully portray this ‘Inception’ of sorts.

Are the flaws justified?

At 140 minutes (without any songs in the movie), the film could have avoided the long drawn action sequences. Also, there are a few loopholes that remained unanswered and where logic is thrown off the charts. Well, there must be some substantial proof that it is in fact, a Bollywood movie!

Gaurav’s dialogue ‘Rehn de. Tu nahin samjhega’ is the story of any crazy fan around the world, told in a sentence. On the other hand, Aryan Khanna’s ‘Main jo bhi hun, apne fans ki wajah se hun’ makes you think twice about the casual statements made by established actors.

The sudden burst of sensibility amidst the chaos seems to be realised only towards the end of the movie when Aryan says, ‘Jo maza apni pehchan banana mein hai, woh dusre ki parchai banne mein nahin’.

As the credits rolled

I left the theatre teary-eyed. The tears weren’t just for the movie. They were a result of the connection I had felt between the character and me. Of course, my obsession for Shahrukh has never crossed the limit, but when you know that someone else (even if fictitious) can also love their favourite actor so much, you find hope.

Watch it to be reminded of SRK’s true ‘awesomeness’ and out-of-the-world acting skills. He literally carries the weight of the entire film on his shoulders. With great direction, a decent script and some touching scenes, FAN keeps you gripped throughout.

Forget about the Happy New Years, Chennai Expresses and the Dilwales. This film makes up for all of them put together.