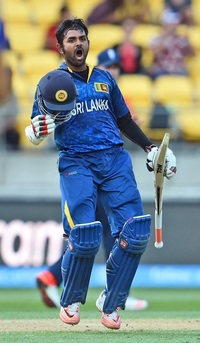 Centuries from Thirumanne and veteran Kumar Sangakkara have propelled Sri Lanka to their second win this edition, while England could only swear at Sri Lanka’s batting as they slumped to their 3rd loss in 4 games in this world cup, thus doubting their ability to reach the quarterfinals.

In the 3 games against big opponents, England have failed to put up a fight even once, thus showing their inability to perform in big moments, whereas Sri Lanka’s main test would be against Australia, after they got humbled by New Zealand in the 7 match series 5-2 and in the opening World Cup fixture.

Both England and Sri Lanka went into this game unchanged, and Eoin Morgan decided to bat after winning the toss, despite doing the same when they got walloped against New Zealand in this same ground.

England started off well, racing to 62 before Moeen Ali departed to a nothing shot, popping one straight to mid-off. Gary Ballance failed again, caught by Dilshan, who dropped 2 catches earlier. But despite that, Bell didn’t get flustered. He played his shots and got out one short of a deserved 50, just beyond the 100 mark when he lost his timbre to Suranga Lakmal, thus the latter getting his second wicket.

Root and Morgan steadied the ship, but as Morgan was looking to cut loose, he cut one straight to Dilshan who was at point for a pain-staking 27 off 47 deliveries. James Taylor would have been relieved when he got out for his 25, who was not any good.

Then it was the Joe Root and Buttler show, spanking the Lankan bowlers all over the park, and the former eventually got to his century with a superb drive through cover-point, and finished on 121 before he was trapped in front by Herath, who eventually went off the field after being hit by Buttler on the index finger. He became the youngest England batsman to score a Hundred in a World Cup.

Sri Lankan bowling figures didn’t look a good reading. Malinga failed for the second time this World Cup, and Lakmal was way too expensive. The only good figure was that of the captain, Angelo Mathews, whose figures read 1-43 off his 10 overs.

The bowlers faltered, but the Batsmen stood up, chasing the required target in just 47.2 overs, with Lahiru Thirumanne becoming the Youngest Sri Lankan to score a century in a World Cup, and Sangakkara, the elder statesman, scoring a century in just 68 balls. This was after Dilshan was dismissed for a well made 44 by Moeen Ali, getting a leading edge to Eoin Morgan. Both of them pummeled the England bowlers to all parts, and the fielding was much worse compared to the Lankans, dropped catch by Ali and Buttler of Thirumanne, and some misfields.

Sri Lanka now stand second in their group table behind New Zealand, while England, currently at 6th, stand down the barrel of elimination, hoping for a miracle to qualify for the quarterfinals.