Stellar star cast. Overwhelming visuals. Beautiful song and dance routines. Impeccable frames. And of course, some over the top promotions. Dil Dhadakne Do was definitely the movie to watch out for, this summer. 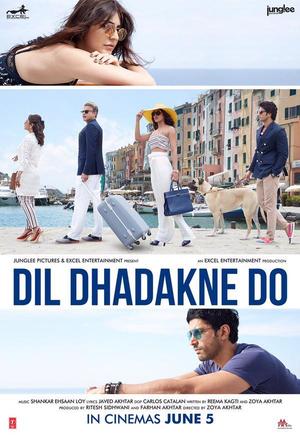 The movie begins with a light hearted narrative of the cliches of a dysfunctional family, 'The Mehras' as they plan to go on a 10 day cruise holiday to celebrate their thirtieth wedding anniversary. The various sequences, beginning from the disagreement over the menu at the dinner table to choosing the guest list, strongly indicate the slight undercurrent of dissatisfaction every character goes through. Then as the plot advances to the 'actual holiday' in a spectacular cruise, it traces convincingly the transformation of the characters as they become more accepting and understanding of each other's perspectives, in a series of events during the course of the holiday.

Anil Kapoor as Kamal Mehra effortlessly portrays the proud businessman and the society-conscious-super-rich-upper-class father. Emotionally distant from his family, we get to see the dynamics of Kamal's characters as he battles loss in the company.Shefali Shah as Neelam Mehra definitely doesn't fail to stun us with subdued strong emotions as a psuedo happy rich housewife with a distressed emotional connect with her kids. Her conversations with her friends, rather acquaintances, are to watch out for, as they humorously portray elite  hypocrisy.

Priyanka Chopra as Ayesha is a complete show stealer. She flawlessly portrays a sensitive daughter and an unhappy wife married to Manav Sangha ( Rahul Bose) shackled by her family who fail to realise that she's a natural at business. She plans the extravagant cruise holiday, only to have her name left out in the invite. Cliched Indian parents. An enviable fashion sense coupled with some extraordinary acting, one of Chopra's finest performances.

An enviable fashion sense coupled with some extraordinary acting, one of Chopra's finest performances.

Ranveer as Kabir Mehra seals the deal. His heart is in flying, but he is forced to take care of his father's business, which he detests. Otherwise carefree, bratty and coupled with some undeniable happy energy, he puts out a clean performance. His scenes with Farah ( Anushka Sharma), who's screen presence looks like more of an extended cameo, are extremely enjoyable and natural.
Farhan Akthar as Sunny Gill comes across as intelligent, sensible and is a pleasure to watch.

The beautiful understanding between Kabir and Ayesha is one of the best aspects of the movie. The cute highschool style romance between Rana and Noori is definitely a plus. Refreshing music and impeccable fashion sense add on to the already classy treatment. The best of the lot is what you hear from Pluto, the pet dog.
The pace proved to be a major setback. The slow pace rather allows the audiences attention to wander. The climax, though true to the story remains pale due to its predictability.
Zoya stamps her trademark uber classy approach in depicting the modern relationships.

Verdict: A bearable watch with added perks of a stellar cast, some laughs and of course a merry holiday.