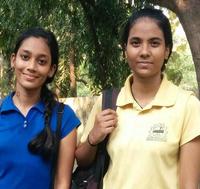 CEG's badminton team seem to be on a winning spree. In the recently concluded ‘Anna Fest’, the badminton tournament was held at Madras Institute of Technology (MIT) on March 7th, 2015. Meenakshi (1st year M.Sc.Electronic Media 5 years) and Jahnavi (1st year B.Tech.IT) represented College of Engineering, Guindy in the tournament. The college team battled it out with 6 colleges to clinch the prestigious title. They played against Dhaanish Ahmed College of Engineering in the quarter-finals. It was child’s play for the team and they beat them in style. They had to face the reigning champions from Indhira Gandhi College in the semi-finals. Our girls showed them the door. However, the final wasn’t as easy as the other rounds. The home team of MIT were their opponents. With beads of sweat, perspiration and determination, the cock was battered to and fro, only to find the wind in our favour. Our college team emerged winners jubilantly.

The word badminton brings the name ‘Saina Nehwal’ to our minds. She’s brought honour and glory to our country with just her racquet and shuttlecock. There are many women out there who are just as talented as her. And CEG seems to have brought out the kindling spirit of badminton in such girls.