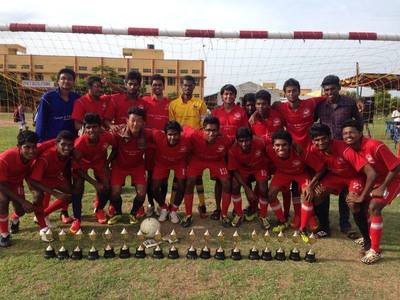 Here comes one more trophy to add laurels to our college. The Football Club of CEG has once again proved its worth by winning the Zonal-II Football Cup which includes colleges in Chennai and Sriperumbudhur. The two day Tournament which was held on 25th and 26th of this month at Rajiv Gandhi Engineering College saw 27 teams in total battling it out for the Cup. The matches were played in a knock out basis.

CEG’s first match was against P.B.C.E. Led by Maha Vishnu (Fourth Year, CSE) and vice Captained by Mukesh (Fourth Year, ECE) , CEG went on to win the match with a big goal margin of 4-0. The Pre-Quarters was played on the same day against Madha Engineering College. The team stuck onto its basics and again won the game 4-0.

With a good day record on-hand the team was expected to win the Quarters the same way as the last two matches. But Loyola Engineering College, who were the opponents gave a tough fight by ending the match with a nil goalless score of 0-0.But the crowd saw the spirited CEGians coming out to win the match in penalties as the score card ended up with 5-4.

CEG faced Sri Muthukumaran Institute of Technology (SMIT) in the Semi Finals which was scheduled for the morning of 26th August. The match was technically rated good with both the teams putting up neck to neck efforts and the final result turning out to be in the favour of CEG FC who won the match 2-0. Finally, the last match - Finals, was down to CEG and Rajalakshmi College Of Engineering (REC) who faced each other on the evening of 26th. CEG who took possession of the whole field finished the quest to win the Finals and the Zonals by defeating REC 2-0.

In the absence of the Captain, when we contacted Mani Murugesan, a promising player of the team, he thanked Mr.Sukumar for his guidance which motivated them to win the trophy.

”We did play with a new set of players and everyone showed great commitment in the game. Ours was a 4-1-2-3 formation all over the tournament and we were defensive throughout. We are looking forward to the Inter Zonals Tournament and we are so sure that we will once again show great spirit towards the sport. ” he added.

Going in to the tournament as a fresh bunch of players, CEG impressed people by giving some promising performances. Here is Guindy Times wishing them all the very best for their upcoming leagues and tournaments.