A Tale of Two Cities was the 12th Novel written by Charles Dickens was and published in the year 1859. It is one of his two historical novels, the other being Barnaby Rudge. The story is set in the London and in Paris and the French Countryside before and during the French Revolution. While the book is sympathetic towards the overthrow of the aristocracy, it condemns the Reign of Terror that followed. 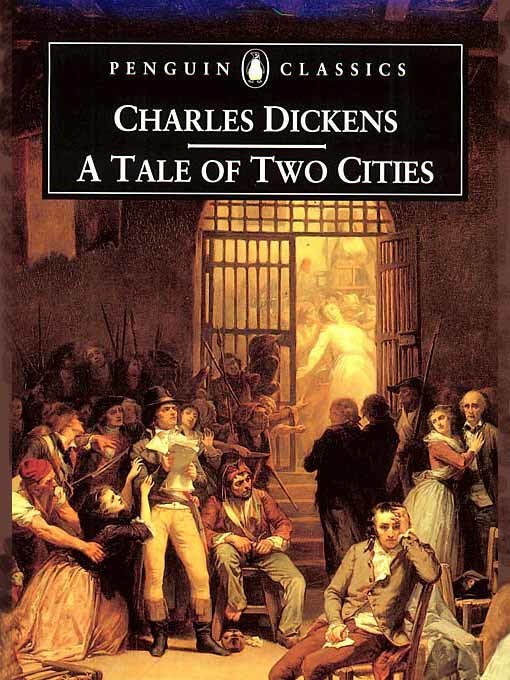 A Tale of Two Cities employs an indirect tone, and the story is viewed from the eyes of an all-knowing-entity, who has direct access to the thoughts and feelings of all the characters. The story, however defines the characters more by their actions rather than by their thoughts and feelings. The story employs a fable like opening, with the famous line, "It was the best of times, it was the worst of times…" giving the story a sense of being surreal. The French Revolution, that has since been eclipsed by the 1st and 2nd World Wars, was the most gruesome episode of violence in Dickens’ period, and a highly debated topic of those times. The outsider point of view of the story allows the reader to feel like he is observing the unfolding of events before him, instead of being part of them.

It follows the lives of Alexandre Manette, a Doctor  who spent 18 years "in secret" as a prisoner in the Bastille prior the French Revolution, his daughter Lucie Manette, Charles Darnay, a wealthy gentleman and nephew to the Marquis St. Evremonde, Sydney Carton, a shrewd barrister who spends most of his time wallowing in self pity, and Ernest and Therese Defarge, the servants of Dr. Manette and later, revolutionaries, before and during the French Revolution.

The story opens with a description of the paradoxical living conditions of the poor and rich in France and England late in the year 1775, and goes on to describe the growing unrest among the lower classes and references the American Revolution stirring in colonialized land. It provides the political setting  and introduces the forces that will determine the fates of the characters of this story.

Lucie Manette finds that her father is alive after 18 years of having been imprisoned "in secret" in the Bastille. She travels to France with Mr. Lorry, an employee of Tellson's Bank, to find that her father  has become rather mentally incapable and can hardly stand light or freedom. Seeing her, though, reminds Dr. Manette of his wife, and he breaks down. Lucie, with the help of Mr. Lorry returns with her father back to England.

5 years on, Dr. Manette is fully recovered and has formed a strong bond with his daughter. Mr. Lorry has been called as a witness for the trial of Charles Darnay, a Frenchman accused of being a spy for France and America. Darnay appears to be innocent, the real turning point occurs when Sydney Carton, a barrister, comments on how similar he and Darnay appear, thus ruling out the positive identifications of Darnay by the other witnesses.

Infatuated by Lucie, Carton and Darnay begin to spend more time at the Manette house. Carton declares his love for her and his willingness to do anything for her and for the people that she loves, but does not propose. It is Darnay's love that Lucie eventually reciprocates and marries him.

Darnay's uncle, the Marquis St. Evremonde is murdered in bed after running down a child in the streets of Paris, and the title passes down to Darnay, who rejects it, and continues to live in England. In the July of 1789, the Bastille is stormed, marking the beginning of the French Revolution, and by 1792, the Reign of Terror has descended in full force. Darnay receives a letter, sent by a servant of the Evremonde family who has been detained by the revolutionaries requesting that Darnay come save him. Darnay leaves for France, unaware of the state of affairs.

Darnay is intercepted at the outskirts of the city, and is sentenced to death by the Guillotine. Dr. Manette, a man respected by the revolutionaries for his 18 year ordeal, helps release Darnay, only for Theresa Defarge to find a letter, written by Dr. Manette, condemning the Evremonde family for his suffering. Darnay is jailed, and sentence to death by the Guillotine once more, but Sydney Carton, takes Darnay's place, and the story ends with the famous lines

The story appears straightforward, but progressively becomes increasingly complex. A major theme in this work is that of duality, though often oppositional - the title is one example, showing the duality between London and Paris, another, in the similar appearances of Charles Darnay and Sydney Carton in spite of their contrasting personalities. The theme of resurrection is recurring, starting with the "recall[ing] to life" of Dr. Manette, and ending with that of Sydney Carton dying in place of Charles Darnay. Fate, forgiveness and revenge drive the plot forward and eventually produces the irony of Manette sending his own son-in-law to the Guillotine.

Overall, A Tale Of Two Cities can be hands-down declared as one of the greatest pieces of literature and one of Dicken's greatest novels. The language, though seemingly archaic, truly drives home the ideas of Dickens' time that he was challenging, and though the plot may seem to abruptly change direction, the climax shows a masterful integration of the lives of the main characters.