Mr. Palagummi Sainath was invited as the chief guest for the launch of the K! mobile app by the CEG Tech Forum. He launched the People’s Archive of Rural India, PARI, as rural India is the most complex part of the planet. He chants ‘Think people, think technology and think planet’. We had the privilege of taking an interview of him and here is an insight of it. 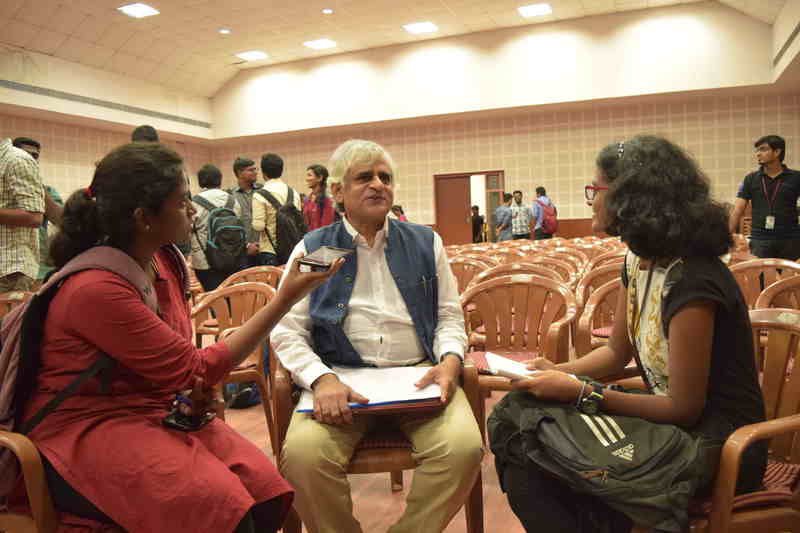 Who inspired you to become the person you are today, sir?

I can’t say anyone individually, as there are several people. The people who moved me the most are the ones who participated in the struggle for India’s Independence.

The society listens to news that spreads on social media. With the help of social media, do you think we can solve the problems prevailing in the society?

I hope our society changes our social media. Majority of the information found on social media is a lot of gibberish content. The peculiar thing about the internet is that it gives us a voice but it doesn’t guarantee that anyone will listen to us. Those who have very loud voices can shut down others; extremely abusive and regressive. Yes, we can do great things with it but we can do greater things with other media. Don’t romanticize it. In India, social media is very narrow as the ones who have access to social media are from better off sections of the society. There will be no democratization of internet in India anytime soon. The social media is proving itself to be anti-social. We must democratize technology and our society. Then, it can do a lot of powerful things. However, that is a potential not yet realized.

Can you tell us about the role of youth in improving the present condition in our society?

I don’t believe in the cult of age. Still, the way the youth had responded in all historical junctions has been critical. Universities are the battlegrounds of ideas. The youth is not one homogenous group; all thinking the same way and doing the same thing. There is one group idealistic, wanting to do things and bursting with ideas. There is also another group who are completely into consumeristic fantasies, who are thinking of the world as within and for themselves. It depends on which section of the youth we are talking about and to what extent they will go. I see a lot of dynamism in young people taking up things. The default mode of the youth is idealistic. However, they are exposed to an external world, where they are socialized to think selfishly. The older generation is to be held responsible for the current situation of the youth as they inculcate cynicism in them in a society of growing disparities and inequalities.