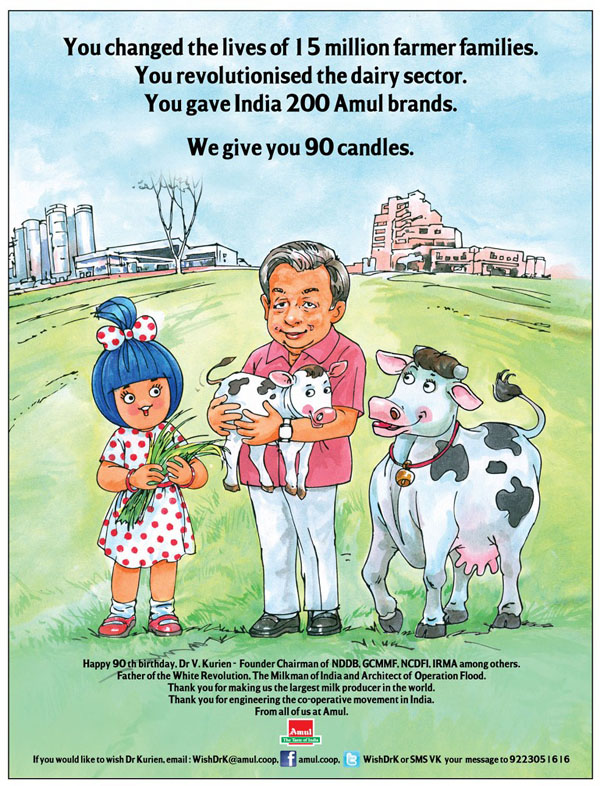 I vividly remember the ‘Mero Gaam Kaatha Parey’ advertisement* which would repeatedly play on our television screens when we were kids. The catchy folk song and the beautiful village women carrying pots of milk would capture my attention immediately. But I didn’t seem to comprehend much from those ‘big’ words that would float their way across the screen during those last few seconds. Did these women magically make the Amul cheese I ate everyday?

As I view the same advertisement after many years today, I begin humming the familiar tune as if on cue. However, the sense of innocent curiosity I had as a kid has now been replaced by immense respect and pride.

Today is the 94th birthday of the man behind The Taste of India. The Father of the White Revolution, recipient of the Ramon Magsaysay Award for Community Leadership and the Carnegie-Walter World Peace Prize, Padma Vibhushan Dr. Verghese Kurien.

I’m proud to say that this remarkable figure of inspiration was an alumnus of my University.

When he returned to India in 1949, he was assigned to a Government Creamery at Anand, Gujarat to serve his bond period. Although eager to move to Mumbai once released from the bond, he was requested to stay longer by his friend Sri Tribhuvandas Patel (the then Chairman of Kaira District Co-operative Milk Producers Union) who needed assistance with the co-operative society’s dairy equipment. His decision to stay eventually became the reason for changing the face of Indian Dairy Industry.

With a vision to improve the lives of the farmers, he collected money from the co-operative to buy new machinery for the milk manufacturing in 1951. As the procurement capacity increased, the popularity of the co-operative began growing and, slowly, so did the number of members in the co-operative society.

In 1954, India’s first President Dr. Rajendra Prasad laid the foundation for the world’s first dairy to manufacture buffalo milk powder at Anand, which was the brainchild of Mr. Kurien. In 1955, the completed industrial plant was inaugurated by Pandit Jawaharlal Nehru. With its successful progress, the Kaira Co-operative decided to give a name for their products in the market. In 1957, the name Amul was coined. Amul is not only an acronym for Anand Milk Union Limited, but is also derived from the Sanskrit word Amulya which means ‘priceless’.

During wartime in 1962, Amul with the help of the Rajkot diary supplied 2750 tons of milk powder for the army, as requested by the Prime Minister.

In 1965, Mr. Kurien was conferred with an honorary degree of ‘Doctor of Science’ by Michigan State University.

Having a dream to replicate the Amul model throughout the country, Dr. Kurien registered the National Dairy Development Board (NDDB) in 1965. His goal was to seek funds for Operation Flood, to make India self-sufficient in milk and milk products.

From 1970 to 1996, Operation Flood unfolded as three phases. With the end of the first phase, milk production slowly expanded to Bombay, Delhi, Calcutta and Madras. By the end of the second phase, the number of milk sheds and outlets for milk increased drastically. The third phase saw the addition of 30,000 new diary co-operatives to the 42,000 existing societies, and more involvement by women members.

I don’t have to explain where Amul stands today. It has reached the zenith of its popularity and is a name that the entire nation connects with. 58 years since its birth, the cute Amul girl with her polka dotted dress brings a smile on our faces even today. 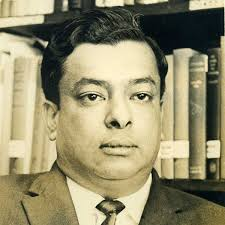 An image of young Dr. Kurien. 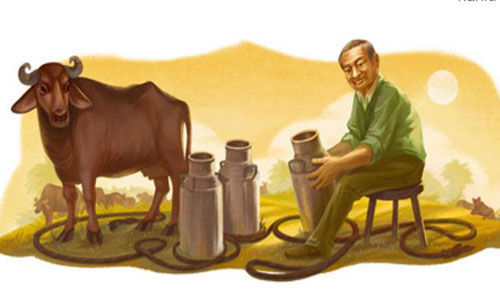 A Google Doodle in honour of Dr. Kurien on his birthday, today.

There’s just one inspiring man we have to thank. A man who didn’t drink milk himself, but dedicated his life to revolutionizing the dairy industry. Dr. Verghese Kurien: 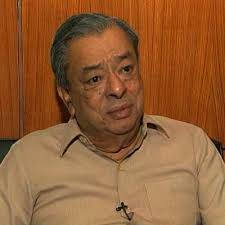