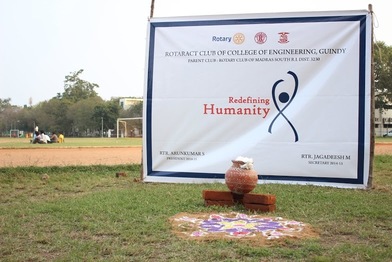 Events that happen all over our campus are one of the main features that make this place lively. The events which are much noticed are the ones that are held in the ground. One such event which happened recently, on Jan 8 was the Pattanathil Pattikaadu. This event was organized by the Rotaract club of CEG. This event was actually the continuation of ICE, Intra College Events which took place at Jan 6 and Jan 7. There were totally 5 events that took place in ICE. Chess, at the quadrangle and Shuttle and Rangoli, at the ground. The other events were Carom and Material Hunt. As the first year students didn't get to have AGNI, it's events like ICE that gives them a better opportunity to mingle among themselves and befriend many new interesting people. Each event in ICE was open to all and received more than 40 participants. Pattinathal Pattikaadu, which was the final stage for all these events, was even more interesting. The chairman Prabhu and co-chairman Nargiz of the Rotaract club arranged a group of volunteers and organized these events all by themselves. The Pattanathil Pattikaadu just as the name suggests had an interesting village custom event, the pot breaking. This had much more audience than participants. Out of curiosity, a few students stepped forward and participated in Pot breaking. As the black cloth covered their eyes, a smirk could be observed on their face. They hadn’t realized that this was not an easy task. As they took the stick and went forward after being spun, the looks on their faces were priceless. Utter helplessness as they searched for the pot. Soon they understood the reason as to why there was a large crowd. The noise and encore from crowd, soon turned to “LEFT! RIGHT!” or “NO, CENTER YOU IDIOT". Some of them swung randomly and some of them went off course. Either way, it’s suffice to say that to break the pot, you have to be either deaf or you have got to have a ninja like concentration. The event that attracted more attention as well as the crowd’s enthusiasm was the Tug-of-war. It can be observed in some videos that some girls show their true inner nature to rip things apart in something called a cat fight. But this tug-o-war gave everyone an opportunity to see that in person. When girls from both team started to pull, their innocent face turned not-so-innocent with a scary grin and they started to pull the rope like some shopaholic women fighting over a shoe or a top or something. It really was a sight to see. The other event was the balloon shooting which was where some of the boys took the chance and tried to show off to the girls. Overall, this was yet another event that makes us feel grateful that we joined this college.