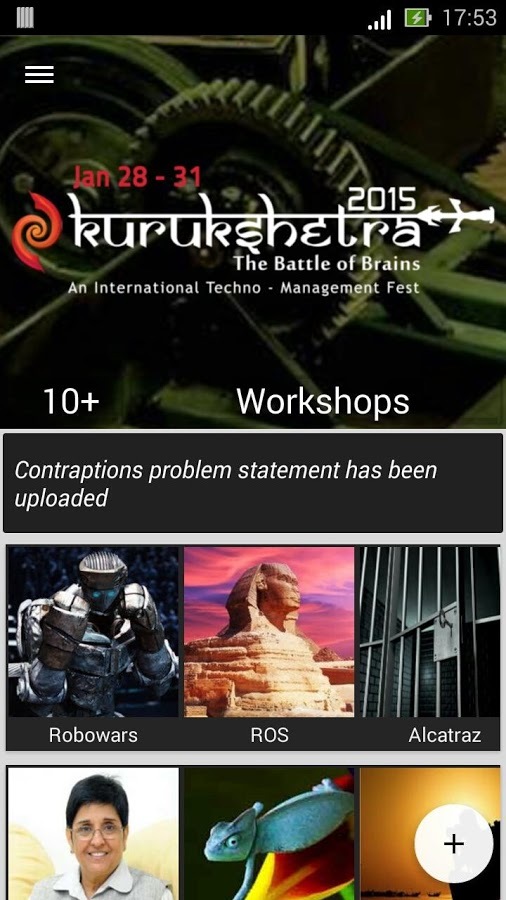 In the quest to find out how this year’s Kurukshetra is being conducted, we tracked down the Tech team k!ore members Jai Vasanth and Dharmesh, who had to be pulled away from their computers for a quick interview.

Guindy Times: Tell us about the Tech team.

Tech K!ore: We have two Kore members and 9 juniors working in the team. We basically try to improve how technically sound we are. We work to maintain the standards of K!’15 so that everyone can talk of how tech-savvy K! is.

GT: The question on everyone’s minds - how is the Tech team different from the Web team?

GT: What does the Kurukshetra app do different from the site?

TK: The app gives all the information about events, projects and workshops among others. We will continuously update it with the schedules and timings of the happenings in K!. We are proud to have made a remarkably good UI which will make people talk about it. It’s yet another way of marketing K! We don’t even have bugging advertisements on the app; it’s custome made for a Kurukshetra enthusiast.

GT: How is the response for the app?

TK: This year we have reached 600 downloads as of December and we expect it to reach up to 2000 before K! starts and during the actual fest we expect the number of downloads to increase substantially. This is fairly good considering that last year was the initiation of the android app in the Play Store.

GT: What about an iOS version?

GT: This year, what changes and improvements did you have to make for the app?

TK: We had to scrap the last year’s version of the app and start from scratch; people crave for a better and different UI each time. This year we revamped the whole UI to be based on a material design for the app (even though it cannot be entirely material without Lollipop running it). Material design incorporates an intentional bolder and a more graphic feel that improves the overall user experience. Google it later!

GT: What else does your team do in CTF?

TK: Many people don’t know that we not only have the  android app for K!, but we also have five in house apps to make life easier for CTF.

GT: What does the Tech team do during the actual days of K! ?

TK: We continuously update the app with the timings of the events, changes in the venues if any and also publish the results.  We are also going to broadcast all the Guest Lectures live. Apart from this, we are streaming the flagship events of Kurukshetra like Godspeed and Robowars on YouTube.

GT: Why don’t you have 2nd years as a part of your team?

TK: It’s not that we don’t want to have second years, it’s just that 2nd years in their 3rd semester do not have enough knowledge of all the elements required to build an app but we encourage anyone having prior experience in application development to join our team.

GT: Then, how should the 2nd years join the Tech team for the next edition of K!?

TK: We will have an open call for both the Tech and Web team together before this semester ends. Unlike other teams we have our open call this semester itself for the next K! edition. Last time we had a turnout of 100 students, who were separated into the Web and Tech teams. We first taught them the basics of app design and then we introduced them to Cordova, a hybrid app development platform where one uses HTML to develop apps instead of the traditional app development languages.

GT: Is there any new ‘tech’ that you people are working on?

TK: This year we have something cool planned for Kurukshetra, where instead of making participants write their personal details like name, K! ID number, phone number etc., we are giving each person a QR code that can be scanned by the organizers. We can then keep track of the participants easily.

“We strive to get the word ‘cool’ out of everyone!”