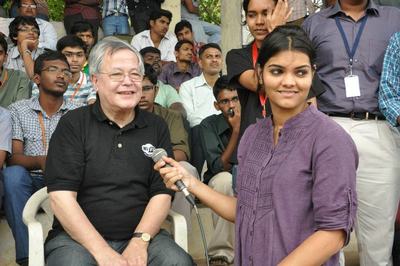 With media becoming a force to reckon with these days, it is no surprise that there is indeed a media team for K! ’15. With big players like the Hindu and News7 in the mix, we rounded up the media team for an interview. As befitted their position, Suganya and Arun, the respective Kores were frank and more than willing to open up.

Guindy Times: What does the Media team do exactly?

Media Team: We are like a mass marketing team. Where the marketing team focuses mainly on colleges and college students, we deal with not only students, but also corporates and general public. The media has a big reach and we use it to showcase the brand that Kurukshetra is.

GT: How important is the Media team for Kurukshetra?

MT: We take Kurukshetra beyond the walls of this college, and are especially useful for the K! projects. When we project these in the media, and they are seen by likeminded corporates, then they may offer to provide funding for those projects.

GT: So how do you go about forming partnerships with media bodies?

MT: Often, we look up existing contacts that CTF may have from previous alliances. We start off with an email briefing them about Kurukshetra and then create a point of contact with which we can then introduce the other teams like the marketing or events teams. We then provide the media agencies with some deliverables and vice versa after which we sign a Memorandum of Understanding (MoU).

For instance, the Hindu was our partner last year, so we went with them again this year as we already had their contact.

GT: What do the media networks then provide?

MT: The newspapers generally put our advertisements a few days before the launch of Kurukshetra along with a build-up article featuring the main events and workshops. Television channels and FM air our promos – Our partners this year are News 7 and Radio Mirchi 98.3 FM.

GT: What is the distribution of your team?

MT: We have around 7 third years in our team. Generally students who are interested in media and who prove to be responsible make the cut. The juniors generally contact media bodies and inform them of upcoming press releases and maintain the online presence, while we contact our more esteemed partners directly.

GT: What gets priority when Kurukshetra does take place?

MT: We give the most priority to projects, as Kurukshetra itself was started with the idea of developing the projects of the students. We give the projects a platform and showcase what CEG students can do and how they may be future products. Then we move on to the events, as the media agencies generally look for something visually appealing that they can telecast.

GT: What are some of the challenges you face in this line of work?

MT: The main challenge lies in the point of contact. Our partnership with the Hindu took almost four months to materialise. We had to contact them repeatedly and were continuously redirected until we got what we were looking for. Such major alliances take time and lots of patience is required to make it work.

GT: What are some of the differences you’ve noticed from last year?

MT: For the first time ever, Kurukshetra is going to be powered by the Hindu. Although they’ve been our partners before, they are now offering more this year – putting up three advertisements in their paper and specific articles in Metroplus and Property plus. This is indeed a major achievement.

GT: What happens during Kurukshetra?

MT: On the main days of Kurukshetra, we escort the media personnel around the campus towards the flagship events or guest lectures that may be taking place. We make sure that the juniors know exactly what is happening at a particular time and where the media can be most favourably positioned to give maximum coverage for all the important things going on in campus.

GT: How different do you think Kurukshetra would be if not for the Media team?

MT: If there were no Media team, the reach of Kurukshetra would probably be limited, probably only among the engineering students. Because of the power of the media, we ensure that the brand name is well known throughout the state and adjacent regions to facilitate maximum participation and recognition.