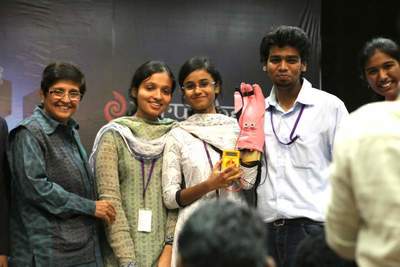 Dr.Kiran Bedi, an inspiration and role model for many across the country, especially women, was at CEG for the launch of e-Glove, an innovation by the students of the ECE department, as part of the 9th edition of Kurukshetra. Dr. Bedi, who famously brought in a lot of changes in a hugely male dominated profession, was the right person to deliver a talk on “Being the Change”.

The e-Glove is an idea visualized and deviced by Goushika Janani, Vinotha Sivaraj and Noor Abdul who are third year students from the ECE department. These gloves are equipped with circuits which provide an electric shock to any offender. While explaining their work, Goushika Janani stated that the e-Glove was not just a safety measure but an initiative to give women the confidence that they could tackle their problems. Though the device hasn't reached a wearble form yet, it is promising and will serve a great purpose once made compact and comfortable.

Following the launch of the project,  Dr. Bedi's talk started off by questioning why the boys and girls present in TAG auditorium were seated separately. She covered a lot of aspects that she believed would bring about a positive change in the nation ranging from increasing individual productivity to epigenetics.

When the audience were asked what they thought the wealth of a country was, a variety of answers popped up, including ‘Time’. “The essence of patriotism is to believe that ‘My time is the Nation’s wealth” she said. She emphasized a lot on the 'Make in India' campaign that the PM Narendra Modi has started, and in her words, we are “Made in India to make in India, to make India”, and that this means as both responsible citizens and the future of our nation, we should use our time in the most productive way possible.

She struck the right chords with the crowd by engaging them in her talk about how cell phones are a major distraction to the younger generation especially in educational institutions which are ‘Temples of learning’, and though everyone agreed that she was right, 99% of the students weren’t ready to give up the privilege of having their cell phones with them during college hours.
She ended her lecture by quoting Muhammad Ali, “Don’t count your days. Make your days count.”

The Guindy Times caught up with her for an exclusive lunch interview, before her talk. Here are a few excerpts from the interview,

GT: Throughout your career as an IPS officer and a social activist, you have brought in a lot of changes in various sectors in the country, which definitely would have resulted in a lot of opposition or resistance from the people, yet you succeeded. As, youngsters, a lot of our ideas, political or otherwise, are brushed off as rebelliousness. What would you tell them about tackling such a situation? 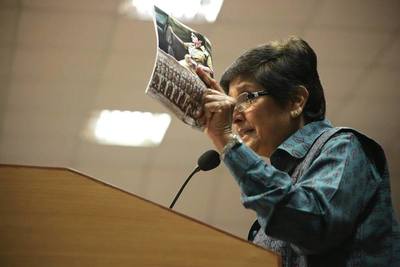 Dr.Kiran Bedi: “Power is a position, and this position comes with certain expectations and duties. Policing is the power to change. But the problem is that when you are in power, you stop changing. Power is the duty to reform. You are not yet in power. This phase is a training for you. If you as students and the youth, have already started making the change or want to make a change, use your persuasive power, social power and the power of perseverance because you don’t have the legal power yet. This will one day let you use this power for the right change. So you are not a rebel. You are driving a change based on ethics and as long as it is ethical, you do it for the larger good whether others like it or not.”

GT: You and your Non-profit Organisations focus a lot on women empowerment apart from many other initiatives, but do you think it is easy for a woman to balance work and family? Or is it just a myth that it is tough?
Dr.Kiran Bedi: “I focus on community development. Every person needs their own type of empowerment, whether it is women, children or the elderly. So unless you empower the community, you cannot empower a single segment of the society. And about balancing, it is about using your time. If you are a good manager, surround yourself with a good support system, and you do what you are best and delegate the rest, it makes you a good leader and that can be applied to your personal life as well.”

GT: Why did women have reservations about joining the IPS back then? Was it because of the obstacles they would face? And how did you handle your challenges?"
Dr.Kiran Bedi: “There were no obstacles for women as such to be in the IPS. It is just about being determined and wanting to be there. I was quizzed if I was serious about taking this up, and if you are determined it won’t be tough. I was never forced to join the services, and my upbringing was such that it was almost a natural orientation. And for me there weren’t any challenges or obstacles I faced being a woman, because I was always an outdoor girl. I was a tennis player from a very young age, and I was in uniform from 14 because I was a part of the NCC. So it wasn’t new.”

GT: In conclusion, what would be one piece of advice you’d give to the Gen-Y?
Dr.Kiran Bedi: “Own the nation. Take ownership and make it a better country for the generations to come.”