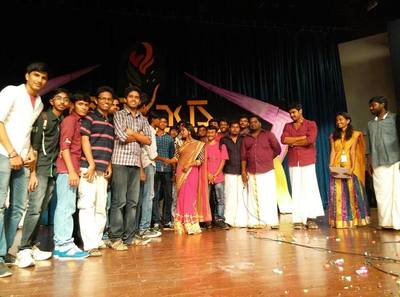 "Every success was once a dream
With no path to follow
With just curiosity in their minds and
passion in their hearts".

It was only a small crew when Ananth and Jagadeesh formed "The Enthusiasts" in 2007 which later tranformed into the "Red Spartanz" because of the compliments given during an NCC camp by an officer who drew comparisons with them and the SPARTANS. It finally evolved into the "CEG Spartanz"- The official variety-entertainment team of CEG and since then their growth has been tremendous. Initially they were a crew that was 'exclusive for boys' but it soon morphed  into a complete team with the girls involving in equal measure.

'Victory comes after a downfall'. Rightly said because even the Spartanz had their share of tough circumstances which they were able to overcome because of Javith, a past member. "He was the main reason why the team stands strong today", says Karthik Raja,a final year member of the crew. the team has made their seniors as well as the college proud, by winning the  runners-up title at Instincts(culturals at SSN college of engineering) held on 14th of March,2015.

Gossip, mimicry and never-ending debates on thala and thalapathy have turned to be the some of predominant ways of grabbing the attention of the audience. Yet the Spartanz toil hard every time to come up with new and innovative ideas.  The portrayal of Mahabharata and scenes from a typical thiruvizha during Techofes'15  definitely  stood out. "The show was just a colourful retreat",said many among the crowd after watching their performance. And for most of you who got a glimpse of the show, you would have also noticed that they made use of props extensively during their performance. In fact that was one of the first things I set my eyes on, upon entering the Spartanz' room. Situated near the Knowledge Park, the room is considered "icing on the cake" by the crew. They profusely thanked the Dean and the student advisor for allocating them the room. "Our hunt for the room ended after 2 years. Perhaps the room is one of the foremost  reasons for us spending our resources on the props as we know that they will be safely kept until and after the show."

"We don't have to trouble ourselves by hunting for isolated Wi-fi hubs or spacious mosquito-free corridors anymore", says Manoj, a final year student of Spartanz.

Upon taking a quick glance, I noticed something quite interesting: the fact that they strictly adhere to the phrase "Why so serious?". There was a never a tense moment and all I could sense was pure unadulterated fun. The only time you could find them holding grim faces would be probably when they are in the middle of their semester exams. Even the freshers didn't miss out on any chances to troll the seniors. With constant giggles every few minutes, I could feel that the compatibility between each and every one of them has grown into an unbreakable bond. The team known for humour and fun on stage, surely did provide me a lot of entertainment even while being questioned, with their 'quirky comebacks','non stop kalaais' and some refreshing 'gana music' sung by Sathish .

Known for surprises all along, the most recent move by the Spartanz that got everyone curious is their dance team. Having been famous only in the field of variety entertainment, the crew also managed to begin a successful venture as a dance crew. "Great dancers are great not because of their techniques but because of their passion". Likewise, though it took 8 years for the Spartanz to realise their dream, they are overwhelmed that it's finally happening. Not just the present members even the passed out seniors celebrate this beginning. The spartanz and Get ready folks ,another dance crew of CEG  were the runners up of the intra college dance competition during T'15. As a chain of consequences, the prize led to the spartanz giving a host performance prior to the "boost with rj balaji" show during the final pro show night of T'15.

Saravanan and Veera Ragavan belonging to the team have contributed much for the team's victory.

"We spent sleepless nights for the show to be a hit. Every morning we practised for our variety entertainment performance and every night we would practise for the competition. Though all of us were completely worn out by the end of our rehearsals we never gave up", said the guys.

Meanwhile the girls had the challenging task of being equally competitive with the guys. Ragavi,one of the few final years of the team had taken up the job of training the girls. Starting from the basic counts to a micro second synchronization she had it all done for them. "Winning prizes was never our motive. A colourful performance worth applauding was our only goal",says Ragavi.

Personally if I was asked to personify team spirit I will,with no second thoughts, point to this team. With undying enthusiasm and 'never say never' attitude these people have come a long way to where they are today. And they promise a lot more. When it was  time for me to leave, I asked if they had anything more to say to the ones who wanted to join the crew, and this is what they had to say :

"We expect no extraordinary talent from your side. Being adaptable and being passionate is what we want and it is what we have. More than a team we are a family. Define yourselves by being a part of this happy family."